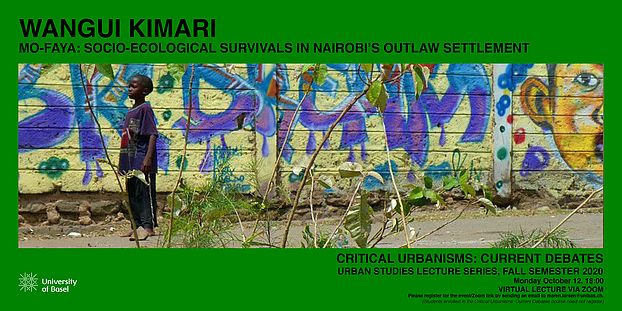 The second lecture for the CRITICAL URBANISMS: CURRENT DEBATES Lecture Series will be given by Wangui Kimari, entitled "Mo-Faya: Socio-ecological Survivals in Nairobi's Outlaw Settlement."

Contemporary urban planning practices in Nairobi are often framed as movements towards “world-class city” status localized within a situated “Africa rising” moment. My current project wants to move beyond the hegemony of these official narratives to think about Nairobi from its “outlaw” settlements. To do this it dwells in the social experiences of urban spatial management in Mathare, a poor ‘slum’in the east of Nairobi, to draw attention to what I argue is the imperial assemblage that produces this city; one informed by political, ecological, social and economic ideas and practices that have their grounding in empire. In so doing, it connects themes often examined in silos – for example, slum fires, evictions, ‘illegal’ water tapping, cholera, extrajudicial killings, youth urban vernaculars, subject formation and floods – and draws attention to how an increasingly militarized urban planning contributes to what I term ecologies of exclusion, allowing that the police become de facto urban planners and managers. Notwithstanding the historical neglect and force of urban governance in the poor space that I highlight, ultimately, I would like to make evident how those framed as the city’s outlaws engage with and emerge from the many violent articulations of an imperial urban planning through dynamic socio-ecological survivals. And from within these poor urban struggles, they are able to articulate more grounded narrations of the history and possible futures of Nairobi

Please note that this will be a virtual lecture via Zoom. Please register for the event/Zoom link by sending an email to maren.larsen@unibas.ch. (Students enrolled in the Critical Urbanisms: Current Debates course need not register)