Lecture by Nitin Bathla: "The Extended City in the Planetary Age" 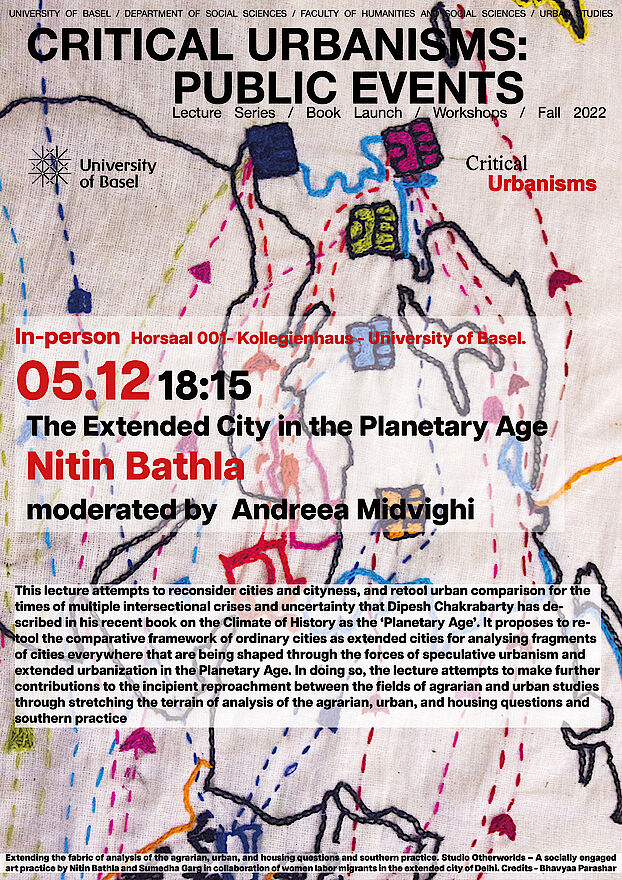 This lecture attempts to reconsider cities and cityness, and retool urban comparison for the times of multiple intersectional crises and uncertainty that Dipesh Chakrabarty has described in his recent book on the Climate of History as the ‘Planetary Age’. It proposes to retool the comparative framework of ordinary cities as extended cities for analysing fragments of cities everywhere that are being shaped through the forces of speculative urbanism and extended urbanization in the Planetary Age. In doing so, the lecture attempts to make further contributions to the incipient reproachment between the fields of agrarian and urban studies through stretching the terrain of analysis of the agrarian, urban, and housing questions and southern practice.

Nitin Bathla is a lecturer and postdoctoral researcher at the Department of Architecture, ETH Zürich, where he works as part of the transdisciplinary project on agri-urbanisms, at the Chair of Sociology. At the ETH, Nitin also coordinates the Doctoral Programme at the Institute of Landscape and Urban Studies. In his research practice, Nitin actively combines academic research with artistic practices of filmmaking, and socially-engaged art. His 2020 film Not Just Roads with Klearjos E. Papanicolaou premiered at several film festivals across the world and was the recipient of the Society of Architecture Historians Award for Film and Video, 2022.
www.nitinbathla.com