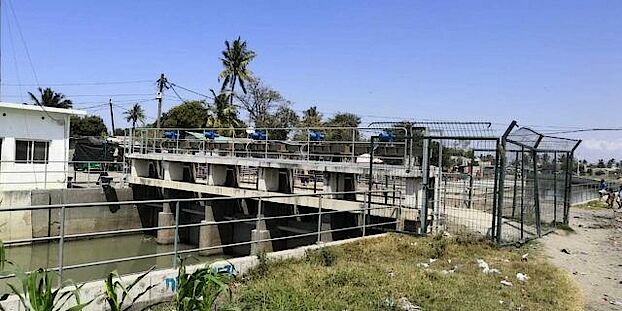 In this article, SNF Eccellenza Prof. Dr. Jon Schubert from the field of Urban Studies offers an Insight into the research project “PRECURBICA” and introduces his team.

Since 2009, my research has focused on the unevenness of global capitalism and its impact on African societies. Based on long-term ethnographic research in urban Angola and Mozambique, I’ve published extensively on state capitalist development and authoritarian politics, focusing more recently on the role of extractive industries, infrastructures, global logistics in urban development. What I’ve learned from my work is that African cities are in many ways ahead of the curve, prefiguring global challenges and opening up to new ways of theorizing these beyond Africa.

The PRECURBICA project builds on these insights and suggests that we learn from planning and building practices in African cities to gain new understandings of infrastructure adaptation to climate change. With two thirds of the world’s population living in cities by 2050, urban precariousness — environmental, social, political, and economic — is the dominant condition for a growing majority of people. And climate change will only exacerbate this, revealing existing, and creating new, social fault-lines and challenges to urban governance. To bridge this gap, PRECURBICA reverses the perspective and centers African actors on the same analytical plane as the ‘global’ urban planners and policymakers that typically dominate these debates. Rather than seeing urban ‘precariousness’ as an endemic condition that mires African societies in a position of dependency, we take it as an invitation to uncover strategies of living and making the city in the face of looming crisis, and learn from these.

Cities are spaces of aspiration and possibility, and climate risk adaptation brings together planners and administrators, engineers and architects, funders and investors, and ‘ordinary citizens’ into a common field of action. We need to learn from the people who ‘make’ the city at the sharp edge of urban climate change about how to face climate risk, and bring these insights to bear on global conversations. The project then explicitly focuses on coastal cities, as because of geography and Africa’s history in the world, this is where the tensions between the competing imperatives of growth-based development and climate risk mitigation are most clearly evident.

The project will develop four distinct case studies to draw out locally specific similarities and differences in the experience of urban, climate-related precariousness. Ambre Alfredo joined the team as a doctoral researcher in August and will bring her experience as architect and urban planner in development consultancy to bear on the Cotonou (Benin) case study. Doctoral researcher Semhar Haile, who previously worked as a policy analyst on climate change and urban development at the OECD in Paris will examine Freetown (Sierra Leone). The team will be completed by Dr Dany Franck Tiwa, who will join us as a postdoctoral fellow in January 2023. He holds a joint PhD in Criminology from the Universities of Hamburg and Utrecht and will develop the Pointe Noire (Republic of Congo) case study. The PI’s own case study will be in Beira, (Mozambique) and investigate how various actors seek to make the city more ‘resilient’ after the impact of tropical cyclone Idai in 2019. The team is bolstered by Natalie Claire Schöbitz, who has joined us with her own project on a G3S starting grant. Natalie until recently worked as a product engineer in urban planning; she is looking at water-related climate risks in Kampala (Uganda) — not a coastal city, but with significant conceptual overlaps for fruitful mutual engagements.